In New Brunswick, at Springtime, all eyes turn toward the rivers. They watch as nature forces snow and ice downstream to make way for change. Winter resists like a toddler at bedtime, it throws debris and jams itself into corners,  making life miserable for those nearby.
The spring freshet is essential for canoeists, it makes the impassable passable.  But, it can also present extreme danger. Strong currents carry fallen trees that get held in the river. These trees create dangerous obstacles.
The Little Tobique River is a narrow, meandering river in northwestern New Brunswick with a reputation for collecting logs. Paddling stories from the river describe careening toward shore after encountering impenetrable log jams.  The river emerges from Nictau Lake near Mt. Carlton. For 60 km or so, it snakes its way through the tail end of the Appalachian Mountains before it merges with the Tobique River near Nictau, N.B. 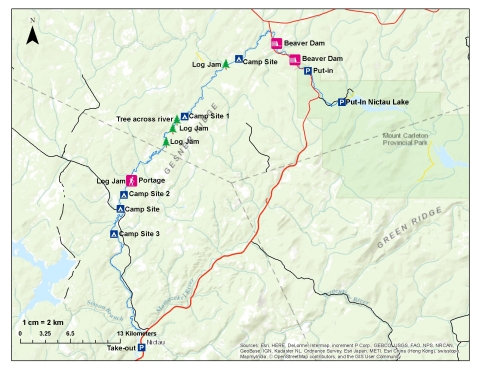 In the past, the current of the Little Tobique carried logs to downstream sawmills. The river also served as a highway of sorts, linking the St. John and Nepisiguit rivers via a portage trail between Nictau and Bathurst Lakes. Mapped as early as the 1600’s — and developed by First Nations far earlier — hikers can walk the trail today in what is now Mount Carlton Provincial Park.
On our first attempted ascent, a local outfitter questioned our sanity when Matt and I inquired about conditions in early May. Stories of sweepers — a log blocking passage — and log jams scared us away.  A year later, we decided running the Little Tobique in mid-May was manageable. People paddle the river all the time, after all.
Regardless, I was anxious when we pulled into the Riley Brook General Store on a cool, mid-May morning. The folks at the store had arranged to shuttle us to our put-in —  near Mt. Carlton Provincial Park.
At the put-in, the water was moving fast, but it was only 1-2 ft deep. I expressed my concern about the level to our shuttle driver, and he assured me that we would have a clean run. I later learned that the closest river gauge in Riley Brook read 2.32.

The scars of winter’s recent exit were evident as we slid our boats into the current. Without leaves on the hardwoods, the forest felt lifeless. Overcast skies blended with bare, grey branches giving the upstream breeze a chilling effect. Freshly fallen trees sat perched in the current, branches dug into the gravel river bottom, roots reaching back toward shore searching for dry land. 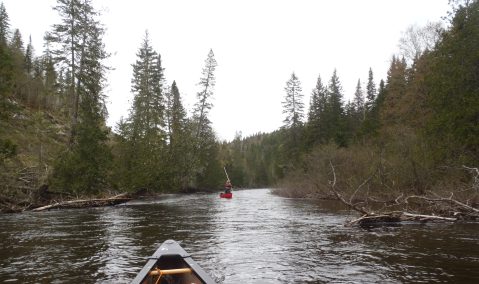 It didn’t take long to reach our first obstacles, two established beaver dams. The dams caused the river to branch out into dozens of little channels. Finding clear passage proved difficult. Promising channels ended in alder swale barricades. I came face-to-face with a confused bull moose in one of the swales — we were both tempted to ask for directions, but being males, we continued on, half lost. 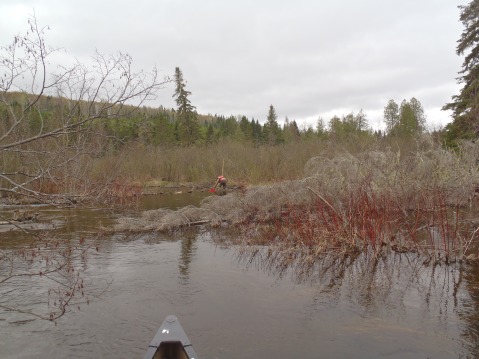 The river was a technical challenge despite a lack of rocks or rapids. Miss the inside eddy on a meandering turn, and you’d tangle with a sweeper on the outside bank. Get too close to a logjam, and the current may pull you underneath.

The sun emerged in the late afternoon as we set up camp. Our campsite was on a gravel deposition on the inside of a tight corner. It offered no cover. We built a fire-pit from soaked driftwood because the area was devoid of large rocks. Damp gravel underfoot suggested the area was recently underwater.

Conditions were frigid in the morning. Thick frost covered the boats and our water was frozen. There was no need to cover a great distance so we relaxed. Matt landed a couple small brook trout, while I sat by the fire in the sunshine, drinking coffee.

We hit the water around 1 p.m., and throughout the course of the day we encountered several logjams, carrying around two of them.  Many of the jams were well established — and likely have been for a long time. 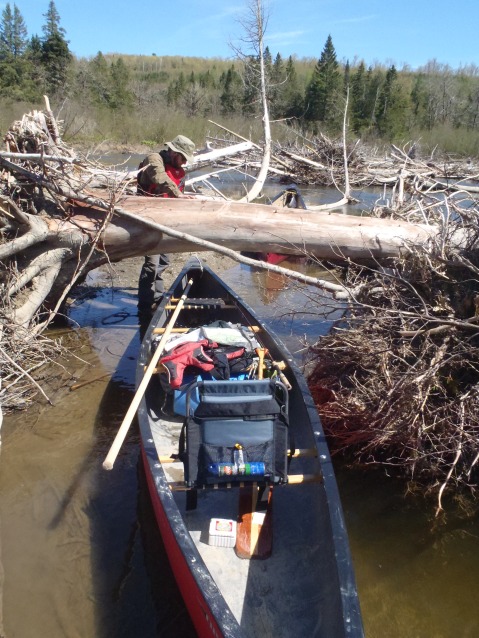 I learned an important lesson about water depth near logjams. I approached a shallow arching turn where logs had entrenched themselves, forming a small jam. In an effort to avoid a portage, it seemed prudent to inspect — what looked like —  a canoe-sized opening in the jam on the far bank.

With my snubbing pole in hand, I approached with extreme caution. As I neared visible range I thrust the 12 ft pole into the tea-colored water and the familiar crunch of gravel was strangely absent. The bottom had dropped away. The pole traveled downward until my hand was at the water line.  Shocked and off-balance, I tossed my pole into the bow, sat down, grabbed my paddle and ferried into a nearby alder swale. As it turned out, there was no opening, and I — rather shamefully — had to walk the boat upstream.

We elected to set up camp shortly after. The site was on another gravel deposition on what is likely a floodplain.  To say it was flat is an understatement. The ground under our tent, 30-40 ft from the water,  was roughly 2-3 inches in elevation above the flowing river. The adjoining forest was thick with alders, so we paddled to a grove of mature spruce across the river to get firewood.

We spent the bulk of our third day fishing as we wound our way through more logjams. Pools at the base of jams were teeming with brook trout.  The fish were small — in the 6-8″ range — but plentiful.  Similar pools further upriver yielded no result. Who can explain the mystical nature of a brook trout run?

There’s an access point and campsite at the bridge located a few kilometers below our second campsite. This point would make a good put-in for those looking for a one-day trip.

By mid-afternoon, we were feeling the effects of two days of sunshine. Unfortunately for us, shady spots were in short supply.  With an air of desperation, we pulled onto a gravel bar and rested under an ad hoc shelter of tarp and paddles. Feeling comfortable, we decided to set up camp.

The gravel was finer than the previous night, suggesting the current was slowing down. The river, however, displayed no signs of reduced power as it flowed past in silence.  Logs of different sizes had collected along the far bank as the river folded back onto itself. 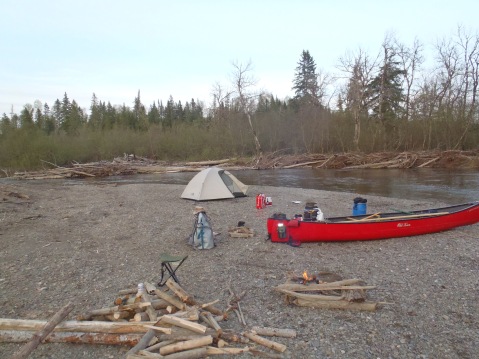 With the trip nearly complete, fireside conversation drifted between what’s to come and has been. Connections to past travelers became real. It was a privilege to travel a waterway that W.F. Ganong declared “one of the most important routes across the province.” A route that Maliseet and Mi’kmaq people used for thousands of years. Where 19th-century guides brought their aristocratic ’sports’ during New Brunswick’s tourism golden age. 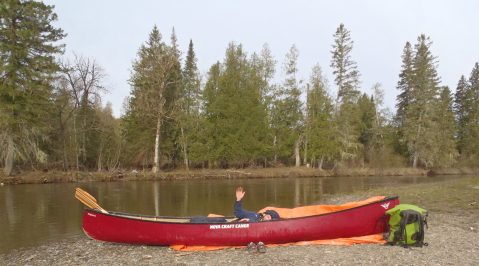 Ever the innovator, Matt decided to sleep in his canoe on the final night. An idea I  supported for no reason other than I welcomed the extra room in my two-man tent. After a spacious sleep, I was up and eagerly awaiting this photo op.

We were on the water early on our last morning. The final leg was just over 25 km — 12 km to the confluence of the Little and the main Tobique Rivers, and the remainder on the main Tobique.

The Little Tobique straightens and widens as it approaches its mouth. With logjams no longer a concern, we expected a dull paddle. But, the beauty of the river valley took us by surprise. Large spruce line the towering valley walls as they slope toward the river.

To paddle from Riley Brook to Nictau is to experience these communities as intended. As we passed through, a small group of locals hunched over on the soft river bank picking fiddleheads. Canoes built by Miller and Chestnut adorned the shoreline. Life on the Tobique, it seems, maintains a natural rhythm much like it has for thousands of years.