Boisetown, June, 2013 — My group had just finished a trip down the Taxis River, when loaded down canoes started arriving at our gravel beach take-out point in droves. The emerging paddlers described a harrowing trip full of rapids and waterfalls down the Main Southwest Miramichi River. The trip sounded fantastic, and the memory of that day was set to occupy a space in my mind for years.

Afterward, I learned that the trip from Half Moon Pit to Boisetown on the Main Southwest Miramichi was one of the classic New Brunswick canoe runs. Fellow canoeists describe the trip as a sort of rite of passage for New Brunswick adventurers.

The Miramichi River and its endless branches are steeped in lore. In many ways, these stories are what make the Miramichi experience unique. In the early 1800s British ships built with timber from the region helped defeat Napoleon. A century later, W.F. Ganong — the preeminent explorer and scientist — relentlessly studied the region’s natural history. In the 1960s, in her book Silent Spring, Rachel Carson dubbed the Northwest Miramichi ‘The River of Death‘ after applications of DDT infamously killed a run of Atlantic Salmon. The species endures, however, and for the better part of a century fly-fisherman from across the globe have flocked to the Miramichi for its prolific salmon runs.

Flash forward to 2016, Matt & I were in his truck bumping along NB Route 107 with his Nova Craft Prospector in tow. We’d decided to spend our May long weekend taking part in the tradition. I’d been warned about this road — it was supposedly one of the worst roads in the province — but I was skeptical. It turns out that the warnings were not unfounded.  Years of hauling timber have taken its toll, and now the 107 is easily one of the worst paved roads in the province.

We arrived at Half Moon Pit around 11:00 a.m. The put-in was in excellent condition, it comes complete with garbage cans, signage, and — my favourite — a ramp and steps to help with launching boats. There’s even the added charm of paddling under an old rail bridge shortly after shoving off.

A single paddler guides a loaded canoe down to the water’s edge while his partner looks on.

For the first few kilometres the water was fast moving, but relatively placid. Small swirls and riffles caused by unseen undulations in the river bed rose in silence around us as we debated the origin of some young forest on the water’s edge. Only a few sentinel white pines remained amongst a dense mat of balsam fir saplings in what was likely once a mighty stand of timber. 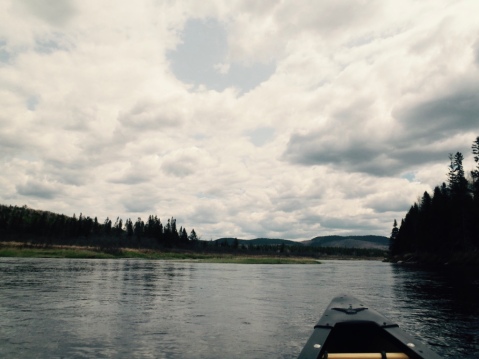 A palpable sense of excitement and apprehension filled the boat on the approach to the first set of rips around Fairleys and Louie Islands. We were living a tradition, but, much like those that had come before, the task at hand couldn’t be ignored. The rips were uneventful, all the larger rocks were easily submerged and offered no real threat. The closest gauge in Blackville read 1.5, which is reportedly the ideal height for a clean run. If the submerged boulders were exposed, all the rips in the upper stretch would have made this trip much more technical.

Matt looking for a line through an early set of rips

For the bulk of the day we cruised along, floating through rips and smaller class I-II rapids with relative ease — including the famous Big Louie and the Narrows. The scenery was beautiful, although there were more camps than expected. The dark green softwoods contrasted with the grey, leafless hardwoods giving the nearby peaks an almost distinguished appearance. As we ate lunch on the bank, a moose stood up in the grass 150-200 yards away and headed back into the woods — clearly annoyed by the handsome canoeists.

Several established, and well-maintained campsites occupy the first upper stretch, these would make an ideal destination for an evening or late afternoon start. 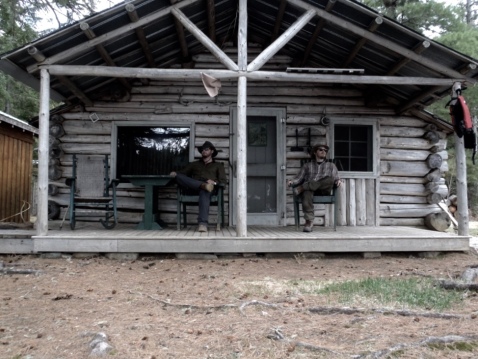 If this is your camp, blame this guy for us wanting to take this picture!

In general, I don’t mind it when my naps are interrupted by canoeists

The biggest challenge of the day was the Burnt Hill Rapids, which, according to the map was Class III. The rapid was situated on a slight left-hand turn and consisted of one main ledge followed by a series of standing waves on the river left, with safer passage being offered on the right. After a day in the saddle, our confidence was high so we lined up the boat on left.

Above the rapids, the haystacks seemed manageable, but as we dropped in, suddenly they felt much larger. Firm braces at the bow and stern steadied the boat as it rode over the waves. Our line was good, but we narrowly avoided the central rock/ledge at the bottom of the rapid. Upon clearing the last wave we whooped exuberantly, while unbeknownst to us, a couple of seniors watched from the deck at the Burnt Hill Lodge. 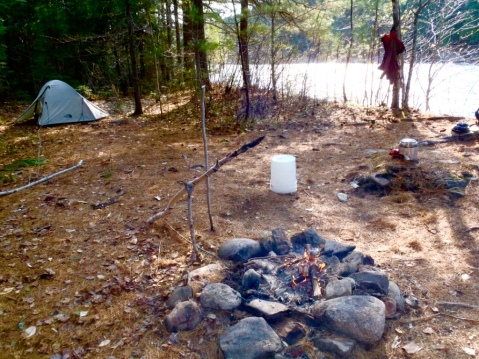 Just below Burnt Hill we stumbled upon a flat, spacious campsite nestled under some white pines; it was too good to pass up. It was clean but had clearly been well used. An established firepit occupied the center of the site and nails could be found in most trees for hanging gear. We settled in for the night and enjoyed a moose steak and a few sips of wine while the crackling fire competed with the sounds of the river for our attention.

There was no rush to start day two given that so much ground was covered on the previous. After a bannock and bacon breakfast, we ending up hitting the water around lunch. The forecast was calling for a high of 20°C and there wasn’t a cloud in the sky — much better than the previous year.

With the difficult part of the trip behind us, our pace was vastly reduced. We stopped to bask in the sun on the gravel beach in front of the campsite at Clearwater Brook. The site boasts lengthy views up and down the river, space for numerous tents, and some of the most intricate fire pits I’ve ever seen. Inevitably, our discussion turned to how often the site is visited, and, as if on cue boats appeared on the horizon. Soggy looking canoeists eventually pulled up to the site and immediately started unloading their gear — most of which seemed to be beer. We took the hint and packed up our stuff.

Looking up river from the beach at Clearwater Brook

A few kilometers beyond Clearwater Brook is Falls Brook Falls, the tallest waterfall in the province, which stands at 110 ft tall — as noted by W.F. Ganong in 1909. The falls itself is located a few hundred meters from the main river, and it is well worth the short hike. If you’re visiting with someone that hasn’t been there before, I suggest having some fun at their expense. Tell your friend to prepare for a grueling 5 km hike and watch their expression when you arrive shortly after departure. 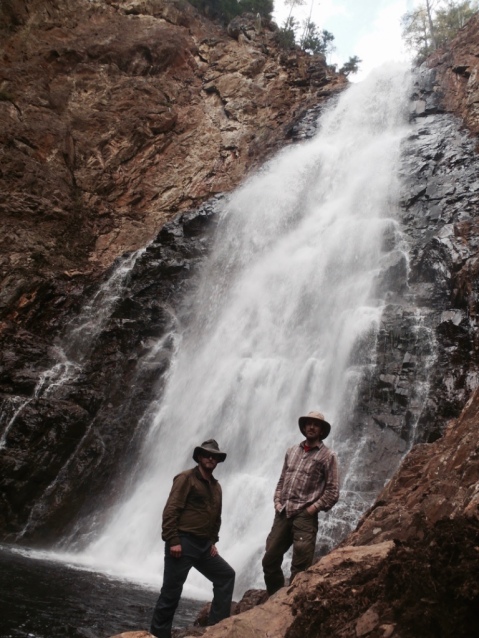 Immediately after Falls Brook we stumbled upon the Trout Brook campsite and opted to set up camp. Similar to the previous night’s, the site showed signs of many years of use and abuse. Broken glass was scattered around the firepit and half burnt chairs were strewn about. The surrounding forest was mostly hardwood — beech, maple, birch, etc. — that had almost fully leafed out. Interestingly, the same species at the put-in — as of the time of our arrival — had no leaves at all, which points to discernible local differences in bud burst phenology.

From the site, we hiked upstream in search of a waterfall that the map indicated was nearby. We mistakenly assumed that a small gorge just above the campsite was the falls and only later learned that Trout Brook Falls is one of the more impressive waterfalls in New Brunswick — alas, maybe next trip.

The next morning, after a beautiful float down the river, a single fisherman stood on the bank of the river just outside Boisetown. Our gazes met, so I called over to him, “any fish?”

I nodded in reply, we both knew it didn’t matter. Up here the river calls and you answer.