No Alternator, No Problem: A Kennedy Lakes Canoe Trip

The May long weekend is sacred for a lot of canoeists: It’s the first paddling-eligible long weekend of the year. Paddlers face cool air and water temperatures, but are rewarded with an insect-free woods. This year my friend Shane and I were headed into the Kennedy Lakes Protected Natural Area in central New Brunswick. The 207 square kilometer area was exempt from industrial activity when New Brunswick established its Protected Natural Areas Act in the early 2000s. The series of small lakes in the area comprise the headwaters of the Renous and North Renous Rivers.

Our goal was to try and access either Lower or Upper Kennedy Lake. Unfortunately, from a tripping perspective, little information is available on the region, aside from the fact that it is notoriously difficult to access. New Brunswick is famous for its road density — it’s often said that there are few places not accessed by vehicle — so it seems fair to say that the Kennedy Lakes are among the most remote in the province.

Aerial photographs from GeoNB indicated that access could be achieved via an old logging road off of Route 108 along the southern boundary of the protected area.  The road would take us to within 500 m of Second Fowler Lake. Second Fowler is adjacent to Kennedy Lake, and at their closest they are a mere 300 m apart. Through some additional research, we learned that the Miramichi River Environmental Assessment Committee had established a portage trail from the end of the access road into Second Fowler Lake. However, a DNR ranger suggested that the chance of the road being passable was 50/50 with a truck — which was fine because I have a truck. Or so I thought.

While driving through Blackville the battery voltage on my old Mazda B2500 started declining rapidly, engine shutdown appeared to be imminent. Fortunately, the old girl didn’t leave me stranded — she left me with just enough juice to reach Shane’s parents’ camp in Renous.

After some fiddling with battery cables in the driveway, the voltage continued to drop. The alternator was dead, and so was the truck. Fortunately, Shane had gotten off work earlier than anticipated and made the last minute decision to drive up on his own ahead of me. The truck may have been dead, but the trip still had a faint pulse. With DNR’s advice in mind, a sense of apprehension filled the car as it pulled onto the decrepit access road late Friday evening. My Old Town Discovery was strapped to the roof and the question that lingered was, how far were we willing to portage?

The road was relatively solid. After dodging sharp rocks, cutting back fallen trees, and bridging deep ruts we arrived at the trailhead around 6:00 p.m. only to find a vehicle parked there. Discussion immediately turned to whether or not this could be a local beer drinking hole — did I hear banjos?

It appeared as though the occupants of the vehicle had gone tripping, so we elected to setup camp at the trailhead and begin the portage in the morning. After a small campfire, and talk of all the trout we were sure to catch, I dozed off to the calls of spring peepers and enjoyed a night full of dreams about expensive repair bills. What truck?

The portage trail was well marked and — mostly — easy walking through dense fir-spruce woods. Snow still covered the trail in many places. The boardwalk installed to prevent damage to the wetland on the last leg of the trail has mostly fallen into disrepair. Missing and/or broken boards caused us to slip into knee-deep mud several times.

Enjoying a coffee at the Second Fowler Lake put-in

At 90lbs the Old Town Discovery 169 is not built for portaging so, for Shane, Second Fowler Lake was a welcome sight. At its deepest the lake is only 3-4 ft but the bottom is covered with layer of mud/sediment equally thick. Conditions were serene, the water was smooth as glass, the sun was shining, and the call of the white-throated sparrow echoed across the lake. The surrounding area was low lying; clusters of pitcher plants lined the shoreline amongst the grasses, rhododendron, and black spruce.

A portage trail into Kennedy Lake was located in the northwest corner of Second Fowler. Red blazes marked trees at the trailhead. The carry was unexpectedly easy, dry, and well marked. At the Kennedy Lake end, broken down old boats lined the shoreline near the trail, having long been abandoned by their owners.

Kennedy Lake is long and narrow, but is still a relatively small lake at 2.5-3km in length. It’s much deeper and rockier than Second Fowler, reaching depths of up to 20ft in places. There are no camps or cottages on the lake, so it is surrounded by contiguous acadian forest. Sentinel white pines line the rocky shoreline at the south end of the lake, while small mountains flank the western side. Immediately after launching from the put-in the shoreline drops away and the water turns black — surely teeming with trout.

Stopping for lunch on a flat rock on the island

A few casts around the bay near the trail yielded no trout.  It was around noon — a poor time for fishing — so it seemed like a good time to explore the lake and look for a campsite. The DNR Ranger suggested a single campsite existed in the northeast corner of the lake, and to us this seemed like logical destination. As we approached the island in the centre of the lake our solitude was disrupted by — of all things — a motor boat. It was irritating that our wilderness experience was disturbed but the irony was not lost on us. There’s something funny about not wanting to put forth effort required to paddle around a lake, but simultaneously being willing to carrying a boat and a motor across portage trails.

With another boat on the lake our fears were realized, the lone site was occupied. What was once a nice site exists on a nearby point, but something had killed all the red pine and it was now a widow makers paradise.  The former site was — predictably —  covered in burnt out old frying pans and pots.

Without a campsite we resolved to paddle the shoreline in search of a flat place to put a tent. Flatness was in short supply — most of the shoreline was rocky and covered in thick Leatherleaf (Chamaedaphne calyculata) bushes. Eventually we stumbled upon the portage into Upper Kennedy Lake near the northern river inlet. The trail leads to a short paddle across a small pond before continuing northward toward the lake, certainly worth exploring but it was not in our immediate trip plan. 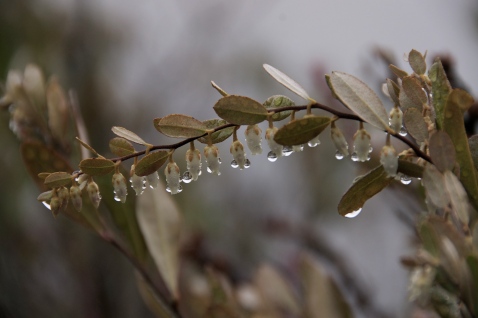 After circling back to the put-in at the south end of the lake we ended up on a sloped site at the mouth of Lake Brook. The site had plenty of flat rocks for food preparation and seating and appeared to be well-used — as evidenced by the burnt out pots and pans. A set of the falls at the mouth of the brook ruled out paddling further down stream, but the active water created a nice little fishing hole. On my first cast from the shore I landed my first trout of the day — a little 6′ brook trout.

With morning came the sounds of raindrops hitting the tent. Inside the tent the gear was mostly still dry, however everything — including the occupants — had shifted a few inches down the slope. Outside the air was cool. A fine mist fell so lightly from the thick low-hanging clouds that the air itself felt wet. Steaming hot coffee with bacon and oatmeal helped ward off the chill. As if on cue, the rain began to fall immediately after breakfast — suddenly breaking camp seemed unnecessary and we committed to spending the day exploring the area.

Damp site at the mouth of Lake Brook

The banks of Lake Brook proved to be worth exploring. The dull skies gave the water a darkened tone as the last of the freshet flowed lazily through the pools after the falls. I stood on a large rock mid-stream and watched as small trout darted after my spinner as it worked its way across the current. The lichens beneath my feet, formerly dull and brittle, were plush and vibrant from the rainfall. My mind drifted to the source of two massive eyelets sunk into large, flat rocks on opposite sides of the brook — were they used to control the start of log drives in a bygone era or installed for more modern purposes? 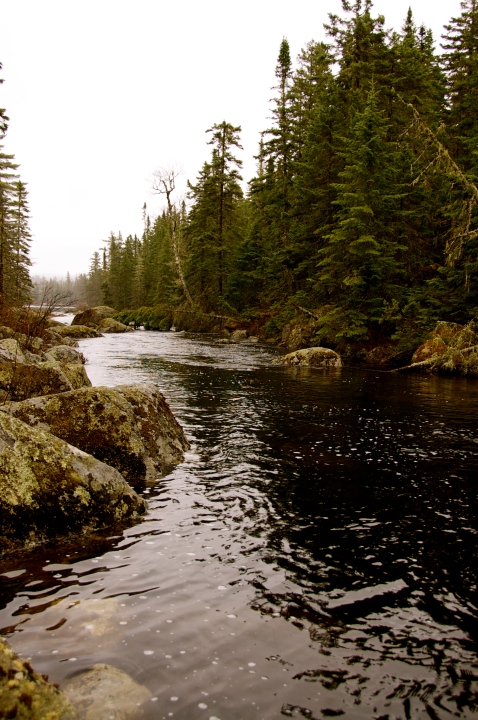 The rain continued through the afternoon. A short paddle around the island left us cold and wet and in need of a fire upon arriving back at the campsite. Storing wood under the tarp overnight proved to be a good decision.  The dry material made starting a fire relatively painless. The need to start and maintain a fire in the rain justifies bringing an axe or hatchet on any trip. Regardless of the intensity of a rain event, roundwood logs will rarely be soaked all the way through, hence the ability to split logs and expose their dry interior can be crucial to maintaining comfort. As we stood around the fire in our rain suits the wind picked up, and talk turned to improved weather on the final day.

A fire helps dry out a couple of wet campers.

The sun re-emerged the following morning after the last of the morning fog burnt off the hills to the west. As we broke camp and made our way back across the portage trails to civilization my CAA membership status abruptly entered the forefront of my mind — had I paid my dues this year, how many kilometers were we from Fredericton? As it turned out, my dues were paid and the tow to Fredericton was completely covered. When we arrived back at the camp in Renous we enjoyed a celebratory beer in the sun and watched as my truck was loaded onto a flatbed bound for Fredericton. Certainly not the ideal way to end a trip, but it was better than no trip at all.

The last of the cloud cover on the final day

3 responses to “No Alternator, No Problem: A Kennedy Lakes Canoe Trip”