Old Town Canoes made headlines in 1978 when they tossed a Tripper canoe from the roof of their warehouse and it landed unscathed. The boat was constructed of a new material known as Royalex — bonded layers of vinyl, ABS plastic, and a foam core. Royalex caught on immediately and companies all over North America adopted it for their own tripping and whitewater canoes.

But it was all over in April 2014 when PolyOne — Royalex’s manufacturer — announced they were ceasing production. Boat builders were left in the lurch as they scrambled to find a suitable replacement. Developing another material compatible with existing canoe moulds proved difficult. A brief glimmer of hope came along when Esquif Canoes announced that they’d developed a replacement material — T-Formex — for release in 2015.  But Esquif lacked the financial backing, and they shut down.

Consumers raced to snatch up the last of the Royalex canoes. Not wanting to miss the boat — literally and figuratively — I caught Royalex fever. I had to act fast if I wanted to get my hands on a canoe like my father’s Old Town Tripper. I called several distributors in New Brunswick and Nova Scotia and their answers were all the same: they were out of stock and waiting on orders that would never be filled.

Looking online at Nova Craft Canoe’s distributor list, I saw there was a dealer a mere 4 km from my door here in Corner Brook. One quick email to a buddy who just began working at the store and I had confirmation that there was one canoe in stock. Tense hours passed while I waited to hear what model, length, colour and, most importantly, material the canoe was made of before I had my answer late Friday evening.

Saturday morning I loaded this 16-foot Nova Craft Prospector onto my truck, knowing I had just purchased the last new Royalex Prospector in Newfoundland, possibly in eastern Canada!

With proper maintenance this canoe could last me a lifetime, but for added insurance I applied Kevlar skid plates. I laid out a template for the skids with plastic and masking tape and roughed up the vinyl left exposed. I applied a generous coating of epoxy on both skids afterward. 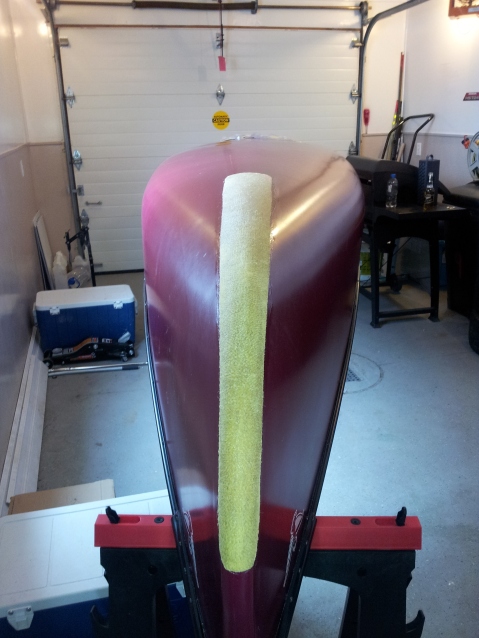 Now I just have to wait for the ice to finally melt in the ponds and rivers here in western Newfoundland to take her on her maiden voyage!

Editors Note: At time of publication Esquif has announced they will reopen and continue developing the T-Formex product. Only time will tell if it will compare to Royalex.