The morning of Sunday, June 1st  I woke up on a futon at Shane’s camp on the Renous River to the smells and sounds of fresh brewing coffee. I sat up and worked my arm and shoulder in a throwing motion. “Feels as fresh as that coffee,” I thought. Today was Part II of my ‘elusive double run.’ I was heading down to Boisetown, and up Route 625 to run the Taxis River. Originally my plan was to run it solo and I was a little nervous. I’d run the Taxis before and thought that it was a good, safe candidate for developing my limited solo paddling skills. So I was somewhat relieved and simultaneously disappointed when I called the group and found out that someone had bailed at the last minute, and that I had a bowman.

The bowman was a professor friend of mine from the University of New Brunswick. He was born and raised in Poland and had only been in a canoe once before – on a run we refer to as ‘Karnage on the Keswick’. It’ll be fine I thought, I’ll teach him the draw and cross-bow draw strokes and tell him when to use them and we’ll get by – and if that doesn’t work, I’ll tell him to put the paddle down and I’ll paddle solo!

Route 625 is a bit of a rough road, it’s a wide gravel road that is easily accessible via car if you take it slow. There are numerous holes and rocks that could easily result in a leaky oil pan — and they will sneak up on you if you aren’t paying attention. I made it to the put-in by around 10:00 a.m. and the guys were there waiting. The water level from the bridge looked like there would be enough to get by, barely. The gauge in Blackville read between 1.3 and 1.4 m — which was fine for the Renous.

Marek easily had 75 lbs on me, and if I was more-or-less paddling solo, I wanted to be paddling a well trimmed Disco ’69. I grabbed my small 30 L barrel, loaded it up with miscellaneous gear, and jammed it behind the stern — which levelled things out nicely. Only later did I realize that this was the make-shift backrest I’d been waiting my whole life for! 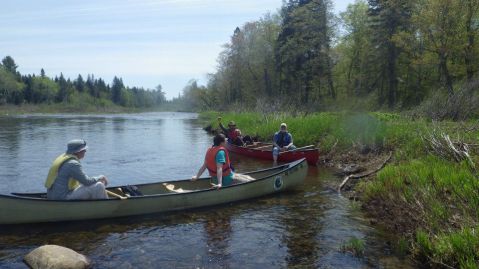 Note the guy with his arm raised, clearly loving his new-found backrest.

Two other boats were along for the run — two friends, and a father-son team. John — the father — was debuting his new (to him) Mad River Escape inflatable folding canoe. These canoes are very similar to the famous PakBoat folding canoes. I had never seen one in person, so I was interested in seeing how it performed on the water. John didn’t seem worried about rocks or his dog’s claws, so I figured they were pretty tough.

If you haven’t seen one before, they have a PVC body with inflatable sides, and an aluminum frame that breaks apart into 32 pieces. The floor is covered in a foam pad.

It was another great day on another one of New Brunswick’s world-class rivers. The Taxis River is much smaller and shallower than the Renous. We scraped bottom in quite a few places along the way — if Marek didn’t have a natural eye for finding the deep water we probably would have had to get out and walk a little bit. The scenery surrounding the Taxis can be quite stunning. There is some beautiful old hemlock forest in a few places and some large white pines that are seemingly growing out of bare rock. New Brunswick’s signature red sandstone cliffs were also prevalent along the way. I was particularly impressed by the sandstone that extended underneath the river and formed the river bed. When paddling over sandstone, it appears as though you should be able to reach down and grab a handful, but one of nature’s most powerful forces has taken millennia to carve out its present form.

Unfortunately for John, the PakBoat didn’t do so well. It performed admirably all day, but as we were paddling the bow seat became dislodged and poked two holes in the PVC shell. Marek and I paddled along side John and I asked him “hows the inflatable boat, John?” and his son responded by yelling, “WE’RE TAKING ON WATER!” Thankfully, I remembered one of the items that was in my barrel was a roll of duct tape. We slid over to the bank and I surprised John with it as they were emptying out their boat. “Oh god, you’re a life saver!” he exclaimed. We applied duct tape patches on the inside and outside of the boat and they held up nicely for the rest of the day.

Bottom side of the patch job at the takeout point – not bad!