The long weekend in September I returned to the hunting area to see if the moose trail I found before had fresh tracks on it. I also hoped to find a spot where I could set up for a hunt. I wanted to make my way down to what appeared to be a meadow/scrub area between three large ponds to check for signs. The topography lines on the map indicated this area was somewhat flat compared to the surrounding country; and I hoped it would be holding moose.

I parked the truck on the new extraction road and began the long walk across the new cutover. I used the wood extraction trail to walk in and immediately noticed abundant moose tracks. As the crow flies, the truck was only 500 meters from the back edge of the cut, but I can’t fly like a fucking crow. I was forced to walk 1000 meters up and down hills to get there!

Having made my way to the back of the cut, the boundary line to the park was just beyond the wooded strip. I followed the moose road (too large to be called a trail) well into the park and I realized that I was walking on an old logging road system. The park would have been harvested in the past prior to its induction into the Canadian National park system in 1973. I caught a glimpse of the smallest of the three ponds I was targeting before finding a gentler slope to descend into the valley.

The gentle slope turned into Mount Everest about half way down and – as I was starting to question my decision to ever start hunting in the first place – I experienced my greatest blunder. I must’ve been daydreaming because the next thing I knew, I was sliding down this hill on my ass in the mud! As I scraped myself off, I cursed myself for my clumsiness and the two new holes in my pants. I looked around and realized I had made it to the scrub-like area on the map, but – more importantly – I realized I wasn’t alone.

Through the fir and birch mixed forest, I noticed the outline of the big black fella I was hoping to see. I tentatively lowered my knapsack to the ground and extracted my camera. I stalked between trees to get a better view while doing my best imitation of a small inquisitive bull. After 25 yards of stalking, I found myself in a staring contest with a wide racked moose.

I snapped photos as fast as my camera could take them while I made my way back to my gear. I didn’t want to spook the moose from the area so I was trying to be as quiet as possible. When I arrived back at the trailhead where I left my pack, I noticed that Bullwinkle was not content in letting me leave just yet. I had aroused his suspicion with grunts and now he wanted to let me know I wasn’t welcome in his house!

I scampered up the side of the hill somewhat and nestled myself in behind a blown down tree. I set my camera up for what was promising to be a vivid and close encounter. The 16 point bull-moose was sporting 3 brow tines on one side, 2 on the other and was showing impressive antler growth on his young frame, a true testament to the quality habitat he called home. He slowly approached me, swaying from side to side. He dropped his head in numerous places to show me his impressive antlers. He blew and grunted on a couple occasions and I was starting to get nervous. 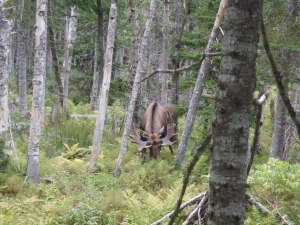 At this point, I realized he was locked onto me and was showing minor signs of aggression. Being alone and with no gun I had to speak up and tell him “That’s enough! Get out of here!” Hearing me speak confused him enough that he became alert to the situation and he began to change his mind about running me over. He postured up, turned away, and slowly trotted back through the scrub and stopped to looking back at me, wondering what I was. I envisioned the shot and marveled at the opportunity I just had. If only it were moose season!

I was convinced; this was the spot to hunt! I made my way back onto crown-land to find a place to set up camp (I wasn’t driving 200+ KMs everyday just to sleep in my bed). With a good location marked out I vowed to return another day to set up Moose Camp! 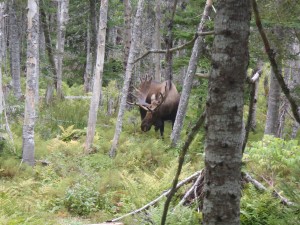