Wingmaster, not so much

The ruffed grouse holds a special place in my memory; it was the first thing I ever hunted. I shot my first grouse in October of 2011, just outside of Chipman, New Brunswick. It was the first weekend in my life that I was a gun owner. I had gone through all the testing, courses, and paperwork in the fall of 2010 and was ready to purchase my first firearm. I called Matt earlier during the magical week and informed him of my intention to purchase a firearm, and we both agreed that given his interest in guns, his presence was required.

Every pump action shotgun in the store found its way up to my eye. I considered how they felt, how they looked, and, most importantly, their cost. Just as I was beginning to think a black Remington 870 Express 12 gauge was the gun for me, a local legend pointed to a used Remington 870 Wingmaster.

“I’d buy that used one right there over the Express,” he said. “The new ones use plastic parts, not steel, and they don’t make’em like they used to.” In my mind I like to think that I replied, “well you can’t beat American steel!” but in reality I just stared blankly until Matt stepped in and struck up a conversation. I walked away from this excursion with a brand new — in 1979 — Remington 870 Wingmaster 12-gauge shotgun, with a fully choked, smooth 28” barrel.  I was now officially a hunter — or so I thought.

On the drive home I kept wondering when and where I was I going to get a chance to try out my purchase. That’s one thing about hunting and shooting: you need a place to do it, and finding one isn’t always easy or cheap. Fortunately, New Brunswick is 48 per cent public land (3.4 million hectares). I was hoping to try some skeet shooting first to feel things out before shooting at a live target. But, before I could say ‘pull,’ Matt invited me to his camp for the weekend to participate in his annual bird hunt with one of his buddies. The camp was located on the banks of the Gaspereau River, in the heart of grouse country.

After a long two days, Friday finally came and we were off to Chipman. Roughly three quarters of the way there, we pulled onto a logging road engulfed by grey speckled alders on both sides. Matt grabbed an empty plastic pop bottle from the bed of his truck and said, “lets see if you can kill this first”. I anxiously removed my firearm from its case, removed the trigger lock, and grabbed a #6 shell. Matt had set up the bottle about 10-15 yards away. I loaded the weapon, removed the safety, took aim and awkwardly squeezed the trigger, maybe closing my eyes in the process. When the dust settled and my ears stopped ringing, the bottle was full of tiny holes. I was now officially a hunter. Of bottles.

With the firearm christened and everything packed up, it was time to get back on the road, but not before a little omen. Just as we were pulling away, a spruce grouse wandered out onto the road for a gravel snack and a dust bath, a sign of things to come. 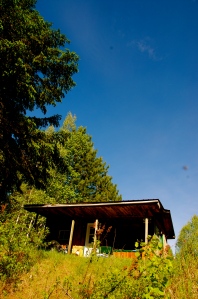 After an evening of cribbage victories the morning had arrived. Outside it was a beautiful crisp fall day; we were surrounded by a deep green and gold forest and accompanied by the rushing sounds of the mighty Gaspereau River.  Matt’s buddy Randy stirred, “Is that rain?” “No man, that’s bacon!” I replied. We were in no rush to get out — grouse don’t get out of bed before 10:00 a.m. — so Matt pulled out a box of skeet. “Pull!” I yelled, and a single skeet was lobbed out in front of me. I pointed the gun, aimed, pulled the trigger and watched the unscathed skeet sail to sweet freedom. I promptly declared, “Must be because it’s a full choke.” “Maybe, let me take a look at that.” Matt replied. “Pull!” he yelled as Randy launched a skeet into the air. And, as a cloud of clay dust rained down upon the ground 20 yards away, he handed the gun back to me and retorted, “There’s nothing wrong with that gun!” Following the liberation of a few more skeet, I finally hit one. After which, I heard from behind a single clap. “It’s about time,” Matt said. I was now officially a hunter. Of clay pigeons. It was time for the real thing.

The three of us piled into Matt’s truck armed with our blaze orange, a few shells, and our shotguns; which were stored in the bed in their respective cases. I remember being pretty excited and anxious. I was able to take some solace in the fact that if we didn’t get anything my freezer wouldn’t be empty; I could fill it with Doritos. There was no way we could eat the 10 bags we brought with us.

As we turned onto a logging road things got more serious. I was informed that since I was riding shotgun, it was my duty to jump out of the truck and make chase if we saw a grouse. Shortly after — as we were driving through a mature jack pine plantation — a grouse appeared about 80 yards up the road. The bird was sunning itself on a log about 5 yards into the woods. I attempted to play it cool — like I’d done this a thousand times. I slowly slid out of the truck and grabbed my gun and a couple shells. I casually lingered beside the truck and gave Matt and Randy my best ‘don’t worry guys this isn’t a big deal’ look — which of course was the opposite of the truth. In exchange, they both provided me with a look that said ‘what the fuck are you doing?’

I casually started to walk up the road  – maybe strutting a little – and loaded two shells into the tube of my Wingmaster. I loudly cycled the action as I continued to stalk up the road. Miraculously the bird was still in place. After getting within about 30-40 yards I shouldered my gun and aimed. At this critical juncture, it dawned on me that the range of my gun was a complete mystery to me. I didn’t want to miss and risk wounding the animal or worse, my fragile ego. So, I turned completely around and yelled the words “am I close enough?” Matt and Randy’s reactions were not difficult to interpret. Their wild hand gestures and inaudible expletives made it obvious — they had never seen anything quite like this before. With their feedback in mind, I resolved to get closer. I turned back to the bird, took two steps, and it provided me with a look that said ‘what the fuck are you doing?’…as it flew away. I didn’t even lift my gun; I just stood there and watched with a newfound case of grouse fever.

The walk back to the truck felt like it was 100 miles. Thankfully, my two dear friends were very supportive. Randy consoled, “Grant, I know this is a bad time to bring this up, but that was literally the biggest partridge I’ve ever seen in my life, how could you miss that?” Thanks Randy. Mercifully, there was plenty of daylight left.

We continued to drive the crown woodlands; regularly stopping to explore overgrown trails with good cover on foot. The sky had clouded over and the wind had picked up –poor conditions for grouse hunting. But, if experiences on this trip and many after have taught me anything, it’s that often your prey will appear when you least expect it — as if out of thin air. This occurred on our next sighting.

We were rolling down a gentle slope, through mixed balsam fir and birch forest, when a grouse appeared in a roadside alder thicket. With the previous incident fresh in my memory, I didn’t waste any time. I jumped out of the truck, grabbed my gun, tossed a shell directly into the chamber, and thrust the action forward — I’d learned that loading them into the tube wastes precious seconds. I stalked up the road to within 25-30 yards, shouldered the gun, set the bead just above the head, slid off the safety, took a deep breath…and pulled the trigger. When I heard the fading sound of feathers flapping against the ground, I knew I had hit it. 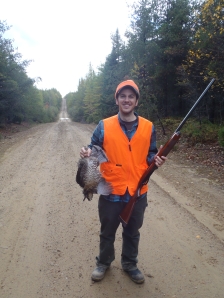 With my prey in hand, I triumphantly walked back to the truck. It appeared as though I had made a clean head shot, inflicting minimal damage to the breast. I proudly held in my hand a beautiful Ruffed grouse. “Nice shot, GV” Randy uttered. Having guided me to my first (second?) bird, Matt proclaimed, “Grant, I feel like your dad right now.” Many hours later, after arriving back at the camp it was time to clean our bounty, ‘and now the work begins’ as the hunter often says. Matt motioned me over, “Grant, come over here and let me show you how to clean these things.” Thanks, Dad.

8 responses to “Wingmaster, not so much”