Hunting Ruffed Grouse (Banasa umbellus) is a favorite pastime of many here in Eastern Canada. Many also consider Ruffies to be the finest table fare of the upland game birds and, I would have to agree. This past weekend I struck out in hopes of bagging a side dish for Thanksgiving supper. The day started out like all others, with the blaze of an alarm, followed by a quick smash of the snooze button — after all, it’s just a bird hunt. However, I was up and out of bed before the next alarm because it isn’t just about the bird hunt, it’s about getting out in the bush with your favourite shotgun and taking in the sights and sounds of the country.

After some breakfast and a healthy dose of TSN (My Flyers lost, Grant’s Leafs won. Argh!) I was out the door. Outside it was a beautiful clear morning with promise of warm afternoon sun. The thermometer read -5°C, and the truck was thick with a heavy frost. After a quick scrape, I was on the road by 8 a.m. heading for Loggers School Road, southwest of Corner Brook.

I joined the many other hunters taking advantage of the season’s first Sunday hunt in NL, but lucky for me most were in search of moose. I traveled in to a road over grown with alders that I had identified on a previous outing and jumped out of the truck to put some miles on my LL Bean boots. I trudged 1.5km down this old road before being forced to turn back it was completely choked off by alders. Along the hike, I enjoyed a brief encounter with a snipe and three ducks which, of course, are migratory birds and require a license I don’t have. 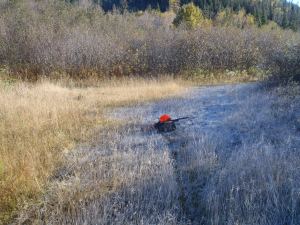 On the return trip I thought back to other bird hunts I had been on over the years (admittedly, not enough since archery season for whitetail overlaps bird season) and I recalled that I never had much luck before 10 a.m. It was now almost 10, and the sun was reaching a height where it could warm the more open portions of the trail. I knew of another trail back off the main road a little ways that would just be catching the light and I decided it would be my next destination.

As I was driving on this cold morning, I thought grouse would want to find themselves a safe, sunny location to warm up a little. I knew I should be looking for roosting trees with a southeast aspect and places where the sun was poking down onto the forest floor.

I parked at the second trailhead, loaded up my Winchester 1300 20 gauge, slung my pack over my shoulder and crossed the road to the trail. The sun was right at my back, casting my shadow ahead of me. I took two steps down the trail and looked up to see a large, white-breasted grouse on the side of the path sunning himself while snacking on some alder leaves. The bird immediately suspected something was amiss and bolted into the underbrush. I quickly shouldered the gun, pushed off the safety, found the bead on the barrel and swung on the bird. I fired off a shot at the bird’s head and, the #6 shot cut a path through the brush, leaving the bird lying on the forest floor. I quickly checked my watch and it was 10:30 a.m.

I retrieved the bird and was staging a photo when a 4-wheeler emerged from the trail adjacent to me. The operator cursed under his helmet knowing that he was only a left turn and minutes away from flushing his first grouse of the day. After a quick discussion about population numbers, 20 versus 16 gauge, and moose hunting, he was on his way remarking he was just getting started for the day.

On my next trip, I hope that I remember my personal 10:00 a.m. rule and sleep through my alarm. Just as long as I get there before my new buddy on the 4-wheeler, who evidently learned this lesson years earlier. After all, the wild is controlled by energy expended versus energy gained.I began the steady climb up the hill when I came to a large stream where the road was washed out. I took this opportunity to clean my supper. I checked my watch and realized that I had promised to be home to help with Thanksgiving supper at noon. This meant my day was now over. Returning with a grouse breast for supper made it all worth it, although I think going home empty handed would have been just fine too.

Hey neat, I picked up an old chestnut canoe made in Fredericton.
Big 🍁syrup season this year #maplesyrup
Neat #lunamoth
Paddling my old Dagger Occoee #bananaboat #rocker #canoe #daggerkayaks #ducttape #patches
Stare at this long enough and your shoulders will start to ache #portage #canoe #newbrunswick #myshoulders
Rain check, bugs check, it must be the end of May? #oldtowndiscovery #newbrunswick #canoe #canoetrip #camping